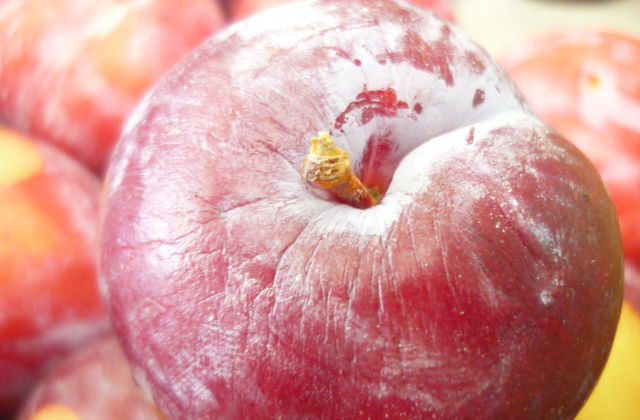 It is well known that mature fruit are comprised mostly of water. Once harvested, fruit no longer have a source of water supply from the tree, so any moisture lost must come from the fruit itself. A decline in initial fruit mass of more than 3-5 % due to moisture loss is typically when visible signs of shrivel become evident on South African plums during storage. In addition to shrivel being unsightly, moisture loss can result in secondary problems such as loss of income due to lower fruit weight, and quality problems such as “rubberiness” and compromised taste.

Once harvested, water typically evaporates from the cells of fruit into the intercellular spaces of the flesh tissue and from there into the surrounding environment, in the form of water vapour. This occurs along the vapour pressure gradient until equilibrium is reached between the inside and outside of the fruit. The speed at which water vapour dissipates depends on the vapour pressure deficit (VPD). As indicated in the book, Postharvest (Wills et al., 2007), VPD is the difference between the vapour pressure of the fruit (a function of temperature and equilibrium humidity) and the vapour pressure of the surrounding air (a function of temperature and relative humidity). While this discussion is mainly about moisture loss, it is important to realise that in situations where the external environment is saturated at 100% relative humidity, water could also migrate into the fruit which can create problem of splitting and cracking.

The speed of water loss from different types of stone fruit is also influenced by natural barriers such as the fruit skin (epidermis), waxy cuticle, hairs (trichomes) and lenticels. Small fruit which have a higher surface area to volume ratio than larger fruit lose more moisture. External factors influencing moisture loss include air movement over the produce, type of packaging employed and handling chain dynamics in terms of relative humidity, temperature and time. While edible wax coatings have been used to manage post harvest plum quality in other countries from time to time. This practice was not commercialised in South  Africa.

It is important to understand and apply the theory of how to store plums in order to limit moisture loss. Whether a plum cultivar has the propensity to develop shrivel over storage or not, the less moisture lost, the better the overall quality and marketability. Our experience has shown that when a plum cultivar has a post-harvest shrivel problem, it is best to first test if perforated shrivel sheets (plum wrapper) or perforated bags (grape bag) applied at packing will solve the problem. This is often the most cost effective solution and is easy to apply. However, the factors discussed under Packaging below must be taken into consideration, as must all the factors involved in good moisture management throughout the handling chain.

Cultivar type strongly influences the susceptibility of plums to develop shrivel during cold storage. Hence, good cultivar evaluation is important to guard against planting of unsuitable cultivars or to instigate research to develop appropriate control measures. Cultivar specific recommendations for plums provided to industry over the years for control of shrivel are summarized below:

Shrivel is generally not a problem so shrivel control packaging is not required.

Shrivel is generally not a problem and consequently shrivel control packaging is not normally used. However, because shrivel may occur sporadically, some exporters prefer to use perforated shrivel sheets (See Packaging below). It is not advisable to use perforated grape bags unless Songold plums have received a SmartFreshSM application. This is because bags may result in atmosphere modification during the warming phase of the dual-temperature storage regime, with a negative impact on fruit quality.

These cultivars are susceptible to shrivel and perforated shrivel sheets or perforated grape bags are utilized to reduce moisture loss. While bags control shrivel more effectively, overripeness may be instigated, especially if used on advanced maturity fruit. This is due to the build-up and retention of ethylene inside the bag. Bags may also increase susceptibility for decay depending on the decay potential present. This is a consequence of the high levels of relative humidity and even free moisture which may occur when using bag packaging. Under most circumstances, in particular when using the dual-temperature storage regime, shrivel sheets are a safer option.

This cultivar is susceptible to shrivel and should therefore be packed with perforated shrivel sheets or perforated grape bags. If Southern Belle is packed in bags and dual-temperature storage is used, consider shortening the warming period at 7.5 °C by 2 days, typically from 7 to 5 days. This may be necessary because bags restrict airflow through the pallets of fruit in shipping containers and consequently, the fruit takes longer to cool to –0.5 °C after the period at 7.5 °C.

This cultivar is generally not susceptible to shrivel. However, for extended storage, perforated grape bags can be used, since there is a tendency for shrivel to develop with longer cold storage.

It has been widely reported that the less mature the fruit is at harvest, the greater the moisture loss during storage. This is evidently because the cuticle has not had sufficient time to develop so its barrier properties are not fully functional. While this makes sense, the impact of maturity on shrivel is not always that clear with fruit harvested within the optimum harvest maturity standards. Hence, if plums are harvested within the optimum window and still develop shrivel; a solution other than harvest maturity manipulation is required.

In some instances, after cold storage of 6 weeks or so, shrivel which is detected after cold storage, when the plums are moved to higher shelf life temperatures, can in fact diminish as the fruit starts ripening. It is speculated that this is due to release of water from inside the cells into intercellular spaces as a consequence of increased membrane permeability which occurs with ripening.

While it is true that the best control of moisture loss will achieved by lowering the fruit temperature to the -0.5 °C temperature target in the shortest time possible after harvest, this may lead to internal disorder problems on susceptible cultivars. The recommendations given for field heat removal and forced-air cooling for Plum – Gel breakdown [PL6] and internal browning [PL5] should be followed, because these physiological disorders are more complex to control then moisture loss and shrivel. Harvesting plums during the cooler periods of the day and holding bins in a temperature controlled environment as soon as possible after harvest can greatly assist in limiting moisture loss.

The principle behind strict temperature and time control between harvest and reaching the low storage temperature target is that when warm fruit with a high vapour pressure is placed under cooling in a low vapour pressure environment in the cold store, the VPD between fruit and environment is high. This leads to rapid water loss during the onset of forced-air cooling. However, as the fruit cools, the VPD declines because vapour so that the vapour pressure in the fruit declines. Hence, rapid cooling lowers the VPD and consequently, the rate of water loss slows down and fruit shrivel potential declines. On the down side of rapid cooling is that the high air speed required to achieve this, probably sweeps away the high humidity microclimate around each fruit which originates from water vapour leaving the fruit. This can actually increase the rate of water loss. To avoid unnecessary problems, stick with the tried and tested recommendations until better solutions are commercialized through research and development.

Perforated shrivel sheets (plum wrappers) or perforated grape bags are commonly used to control shrivel on plums. These liners are effective because they increase the relative humidity in the environment surrounding the fruit by encapsulating water vapour migrating from the fruit. The liners also reduce the air velocity which passes over the fruit during forced-air cooling and cold storage and thus prevents the microclimate which develops around the fruit (from water vapour exiting), from being swept away in the air stream with the resultant increase in the rate of water loss.

Perforated shrivel sheets are more highly ventilated than the perforated grape bags. Hence, while shrivel control is better in bags, the risk if decay development is higher because relative humidity and ethylene levels increase to higher levels in the more “closed” the bag liner system. The ethylene accumulation can lead to faster fruit ripening which when combined with a high relative humidity can be a recipe for decay proliferation if inoculum is present. It remains important to use the appropriate technology as recommended through good research! Because the risk of decay increases with use of liners per se, it is very important to ensure that good orchard and pack-house hygiene is practiced and that good postharvest decay control measures are applied.

When using perforated shrivel sheets and bags it is important that:

a)The size of the sheets and bags are correct for the intended box format (if too small then too much humidity escapes and shrivel control is compromised).

b)The perforation configuration is correct (the number and size of the holes is important to manage wetness in liner taking decay control into account, as well as atmosphere modification which can become problematic).

c)The perforation quality is good and that holes are open (if holes are not open it can lead decay problems due to excessive wetness in the liner, as well as possible problems such as internal disorders associated with unintentional atmosphere modification and inadequate air flow which can affect cooling).

d)The perforated shrivel sheet is placed correctly in the box and properly closed (overlap the sheet join in the middle of the box on top of the fruit) and that bags are closed with a good overlap fold.

While a relative humidity higher than 95% in the environment surrounding packed fruit is best for control of moisture loss and shrivel, it can lead to increased decay susceptibility which reportedly occurs at humidity higher than 90%. For this reason, it is important to ensure that meticulous pre- and postharvest decay control is practised when using shrivel sheets and even more so, grape bags to control moisture loss. Since many South African plum cultivars must be stored and shipped using dual-temperature regimes with a warming phase incorporated, moisture management and temperature management is very important. As stated under Packaging, perforated shrivel sheets are safer to use than the perforated grape bags, because they are more ventilated. This enables better temperature management than bags and the lower relative humidity attained reduces the risk of decay development.

The longer the storage duration, the greater the moisture loss and the greater the risk of shrivel. The effectiveness of the perforated shrivel sheet and perforated grape bag is ascribed to restriction of moisture loss from the fruit for the greater part of the storage period. In the absence of these liners, even when the fruit temperature is the same as the cold stores, the latter has a lower vapour pressure due to a lower humidity in the storage atmosphere. This causes a small VPD and water vapour migrates out of fruit throughout the storage period. Use of a liner increases the vapour pressure in the atmosphere surrounding the fruit, which decreases the VPD between the fruit and its surrounds by increasing the relative humidity within the pack. This limits moisture loss to an absolute minimum.