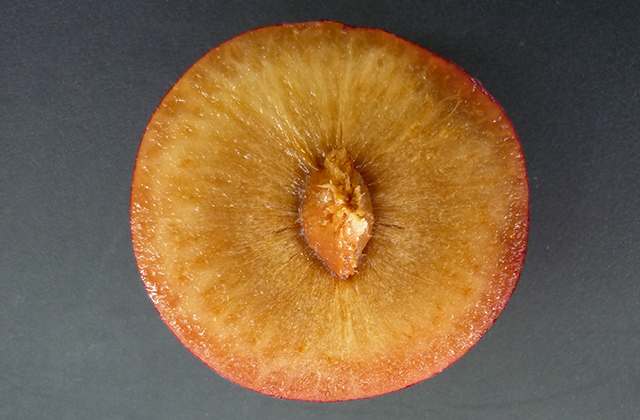 Internal browning in a plum.

Plum fruit with internal browning (IB) have a normal external appearance, but exhibit a brown discolouration of the flesh tissue which changes from a light to dark brown colour with increasing severity and is associated with loss of juiciness. The disorder typically starts just below the skin of the fruit and spreads inward towards the stone.

IB develops in certain plum cultivars due to abnormal physiological circumstances. It is a true chilling injury since it only develops in fruit after harvest during storage at low temperatures. Being a progressive disorder, IB levels tend to increase the longer the storage. The disorder frequently occurs in plums harvested at pre-optimum maturity and stored under conditions which severely retard ripening. The explanation for this is that pre-optimum maturity fruit have higher levels of polyphenols, the substrate required for the browning reaction. When such fruit is stored at low temperatures around
-0,5°C, the cell membranes may become leaky due to cracks which develop in the membrane lipids. This can occur after only 10 days storage. Under these conditions, the phenols which leak unrestricted out of the vacuoles come into contact with the browning enzyme polyphenol oxidase which is bound to plastids in the cells.  The resultant oxidative browning manifests as IB. The disorder typically starts developing just below the skin of plums. This is because the tissue below the skin is often less mature than the tissue nearer the stone, as explained for gel breakdown in plums [PL 6]. Technologies other than low temperature storage which have been associated with development of IB as a consequence of the ripening inhibition effect, under certain conditions and with certain cultivars, include: controlled atmosphere storage, modified atmosphere storage and ethylene scrubbing. It remains important to only utilize technologies which have well tested on a cultivar specific basis for storage of fresh produce.

As stated under the Plum – Gel Breakdown section [PL 6], plum cultivars with inherently high IB susceptibility often need to be stored using a dual-temperature regime.  This is because when fruit is cooled to low temperatures the cell membranes change from a flexible to a solid state.  In the solid state the membranes develop cracks and become leaky as explained above. However, when the dual-temperature warming phase is applied, the membranes regenerate from the solid to flexible state which helps maintain cell membrane and cell integrity. The key is to apply the warming period within 10 days of commencing low temperature storage, otherwise the cell membranes may become irreversibly damaged, and in which case the warming will have no beneficial effect. If plums are held too long in the warming phase fruit would become overripe. Hence, the temperatures are lowered back to around -0,5°C immediately after the dual-temperature warming of between 5 to 12 days has been completed.

Cultivar type strongly influences the susceptibility of plums to develop IB. Hence, good cultivar evaluation is important to guard against planting of unsuitable cultivars. All cultivars where dual-temperature cold storage is recommended can develop IB if stored incorrectly, i.e. at single temperature. The more susceptible cultivars are Sapphire, Sunkiss, Sundew and Songold.

The harvest maturity of certain plum cultivars significantly influences levels of IB which may develop during cold storage.  Plums harvested at pre-optimum maturity are particularly prone to develop IB, especially if stored for long durations using low temperatures. In addition to IB, plums harvested immature often fail to ripen normally during storage and are hard, acidic and generally inedible. Shrivel is frequently a problem that also develops during prolonged storage of immature plums. While harvesting at pre-optimum maturity holds the risks previously referred to, harvesting post-optimum maturity fruit may have equally damaging consequences such as overripeness, gel breakdown and shrivel. Hence, the importance of harvesting and packing optimum maturity fruit cannot be over emphasized. Mixed maturities, where pre- and post-optimum maturity fruit is packed together with optimum maturity fruit is highly problematic for buyers. Multiple picks through orchards are usually required to avoid this. Additionally, sorting into similar maturities using skin colour on the pack line, can assist in quality maintenance.  For example, where the dual-temperature regime is to be used, it enables selection of the appropriate warming phase duration. Research has shown that for most plum cultivars, flesh firmness measured using a penetrometer fitted with an 11-mm plunger should be used as primary maturity indicator.  Thereafter, if suitable Total Soluble Solids are measured, the associated skin colour and fruit size can be used for pickers to identify plums suitable for harvest.

To restrict IB it is important not to force-air cool the fruit too rapidly. This applies especially for IB susceptible cultivars which have been harvested at the less mature side of the optimum window. The recommended forced-air cooling time to the storage temperature of –0.5 °C is between 24 and 36 hours for most plum cultivars. In the case of possible heat wave damage, research has shown that even slower cooling, between 48 and 72 hours, can assist in reducing levels of internal disorders.

Different cold storage regimes are required for different plum cultivars and have a significant impact on fruit quality maintenance.  Accordingly, it is important to know what regime to use for what cultivar and why!  The two most common cold storage regimes used for South African plums are the regular atmosphere single- and dual-temperature regimes. Since many South African plum cultivars cannot withstand initial durations longer than 10 days at single low temperature without developing IB, dual-temperature storage is often the only solution to achieve longer storage.

The single-temperature regime entails holding fruit at -0.5 °C for the storage duration which could be anything up to 10 weeks depending on the cultivar. The dual-temperature regime involves storage at -0.5 °C for a maximum of 10 days after harvest, followed by a warming phase at 7.5 °C for between 5 to 12 days, after which the temperature is returned to -0.5 °C for the remainder of the cold storage period. The duration of the warming phase is selected based on factors such as cultivar, harvest maturity, perceived inherent fruit quality and storage period required. However, this type of manipulation can only be done effectively if shipping consignments contain plums of the same cultivar and similar maturity and packaging. The single-temperature regime is preferable because it is much easier to use commercially.

It is important to understand that if single temperature storage is used on the wrong plum cultivar, it is possible that visual IB symptoms will not be apparent while the fruit is kept at low temperature, but that the disorder can develop to very high levels within a day two at higher shelf life temperatures.

Weather conditions impact on fruit physiology which determines the inherent quality potential of stored fruit.  The nearer the harvest, the more dangerous sub-optimal climatic conditions can be. The precise impact of climate on fruit quality is difficult to accurately predict because it varies from year to year and impacts on multiple complex factors in the plum tree and its fruit. Rain and cool conditions followed by days of ambient temperatures higher than 38 °C are known to cause IB in certain cultivars such as Laetitia. Equally damaging are heat waves where ambient temperatures reach 35 °C for 3 days, or 38 °C for two days, or 40 °C for one day just before harvest. Under heat wave conditions it is important to ensure that the soil moisture in the orchards is adequate. This helps prevent heat damage and shrivel. Fruit maturity permitting, it is best not to harvest at extreme temperatures. As a general guideline 28 °C is regarded as the maximum “safe” temperature for harvesting plums. During or after high risk climatic conditions, fruit which are immature on the tree have a better chance of not being damaged.

Therefore, if harvested a few of days after the problem weather conditions have abated, the internal quality should hopefully be satisfactory. In the case of mature fruit that must be harvested because it has ripened beyond the middle of the optimum window, it is good practice to cut a sample of fruit through the equatorial axis and do an internal inspection for flesh tissue damage. Flesh tissue damage detected at harvest, indicates a very high quality risk. As a progressive disorder, IB like gel breakdown will increase with longer storage so export and extended storage of such fruit is high risk. After adverse climatic conditions, even if no IB is detected at harvest, it is recommended to do an internal examination of the fruit again after forced-air cooling.  If tissue breakdown is detected the fruit quality is probably suspect and storage should be kept as short as possible.

Essentially, the purpose of modified atmosphere packaging is to improve the quality of stored fresh produce through retardation of ripening, control of decay (with elevated CO2 levels) and control of moisture loss.

In our experience, in the case of plums tested in South Africa, unintentional modified atmosphere packaging in the form of polyethylene plastic bags has been known to exacerbate IB in susceptible cultivars, in particular those which have been harvested at pre-optimum maturity. While this could be a due to CO2 intolerance, it is also possible that ripening inhibition slows the breakdown of polyphenols to the extent that when cell membranes loose integrity, for whatever reason, IB develops as the phenols leak out of the cell vacuole and come into contact with the enzyme polyphenol oxidase.

The application of any liner type must be carefully considered, in particular if the dual-temperature regime is applied. This is because the air-flow barrier created by liners delays warming of fruit pulp temperatures during the warming phase and similarly, hinders cooling thereafter. The resulting variable cooling profiles for boxes of fruit is further affected by the position of boxes in the pallet and the position of the pallet in the shipping container. This can lead to variable outturn fruit quality. With ongoing international development of active modified atmosphere packaging, it is possible that cost effective options became available sometime in the near future

Controlled atmosphere storage can be applied without some of the complications associated with modified atmosphere packaging and is more precise since CO2 and O2 levels can be controlled at specified levels. If applied in shipping containers during transit the drawback is often that it is only functional for a part of the total handling chain. Despite some commercial exports in the early 2000’s the technology never took off in South Africa. This is probably due to insufficient benefit versus cost and possibly because it can increase fruit quality problems such as IB if used on susceptible fruit.

As for all technologies used for storage of fresh fruit, only consider use of modified and controlled atmospheres if comprehensive laboratory and semi-commercial testing has proved it safe to do so.