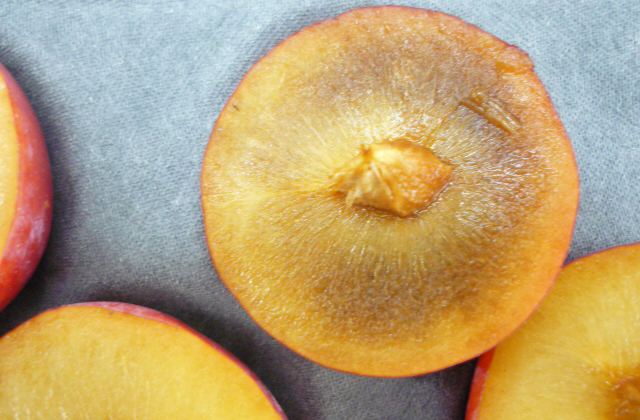 Plum fruit with flesh breakdown (FB) have a normal external appearance, but exhibit gelatinous breakdown of the flesh tissue midway between the stone and the epidermis. With increasing severity the disorder spreads inwards and outwards, changing from a translucent to a brown discolouration and is associated with loss of juiciness.

As far as can be established, the internal disorder referred to has not yet been defined in scientific publications. From a research and commercial point of view it is important to make a distinction between internal browning which commences in the outside of the flesh tissue just below the fruit skin, gel breakdown which commences in the inside tissue immediately around the stone and flesh breakdown that commences in the centre of the flesh tissue midway between the skin and the stone. Correct diagnosis of internal disorders is vitally important for technologists to formulate effective control strategies. Having said that, flesh breakdown can be regarded as gel breakdown. It is possible that the difference in the location of the disorder compared to typical gel breakdown is due to ripening patterns in the flesh tissue of different plum cultivars.