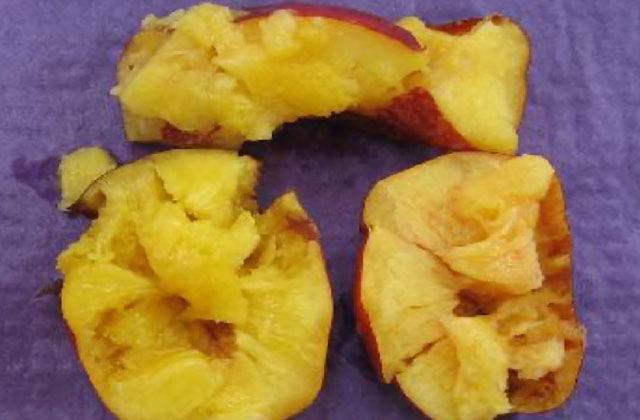 Woolliness is a physiological abnormality that occurs during ripening of susceptible peach and nectarine fruit after prolonged cold storage. It is characterized by flesh tissue with a dry, mealy texture from which no juice can be squeezed. Pulpiness is a mild form of woolliness in the sense that limited amounts of free juice can be squeezed from fruit. Both disorders are accompanied by a loss of flavour.

Woolliness only develops in susceptible fruit after cold storage, so it will typically not be detected in peaches on arrival in the market, but may develop during subsequent ripening under shelf life conditions. Woolliness only occurs in melting type peaches. Non-melting types are not susceptible to the disorder. The chilling injury disorder is associated with abnormal pectin degrading enzyme action. This occurs when pectinmethylesterase and polygalacturonase activity is adversely affected by prolonged exposure to low temperatures. With normal ripening, water insoluble pectins are converted to water soluble pectins in the cell walls and middle lamella. However, if the pectins in the cell walls and middle lamella are not broken down effectively, due to abnormal enzyme activity, the cell fluids leaking from the inside of cells into the cell wall area, bind into gel complexes with the pectins, and hence a dry flesh tissue texture develops.

Pulpiness is a term used for a less advanced form of woolliness. It is synonymous with texture of flesh tissue that is semi-dry, because while juice can be expressed by hand, there is very little free juice available. Pulpy fruit are unpleasant to eat. Pulpiness is often an indication that fruit are either still going to develop full blown woolliness, or that the fruit have actually passed through the woolly phase and are developing a normal tissue again. This can happen if pectolytic enzyme activity is restored before irreversible tissue damage has occurred.

Peaches intended for storage must be harvested mature but not ripe. While woolliness can be reduced by harvesting some cultivars at more advanced maturity (< 8 kg flesh firmness), this is often not practical because fruit harvested more mature is difficult to handle, may bruise easily and are prone to overripeness. In most cases, this leads to low pack outs. Harvesting peaches at more advanced maturity may also lead to a larger variation in maturity in the cartons, which raises its own set of problems.

To enable pack houses to handle peaches optimally, most cultivars should be harvested at flesh firmness between 9 and 10 kg, with the background skin colour changing from green to yellow. Pre-conditioning (pre-ripening) or CA storage may then be required to control woolliness development on susceptible cultivars.

Some cultivars, like August Red, which ripen from the inside flesh around the stone do not react favourably to the pre-conditioning technique. On cultivars such as these, the flesh firmness determined in the outer mesocarp tissue on the cheek of fruit is not an accurate indicator of maturity. CA storage, which tends to stimulate higher enzyme activity during ripening, can be used to reduce or prevent woolliness on cultivars like August Red.  A CA regime of 2% O2 and 5% CO2 was most commonly tested or used in SA. It is important to note that in this case, CA storage is not used to extend cold storage but rather to prevent woolliness. Good cultivar specific research is imperative to establish what technology is suitable for woolliness control prior to commercial application.

MAP can be used on certain cultivars to reduce woolliness and the mode of action is similar to that of CA storage. If MAP bags are considered, the atmosphere modification of the specific bag and maintenance of the cold chain to prevent over modification of the atmosphere is of the utmost importance. Good cold chain management is also important to prevent moisture build up inside bags which can lead to high levels of decay on fruit. As stated above, good cultivar specific research is imperative to establish what technology is suitable for woolliness control prior to commercial application, and this is especially important when considering the commercial use of MAP.