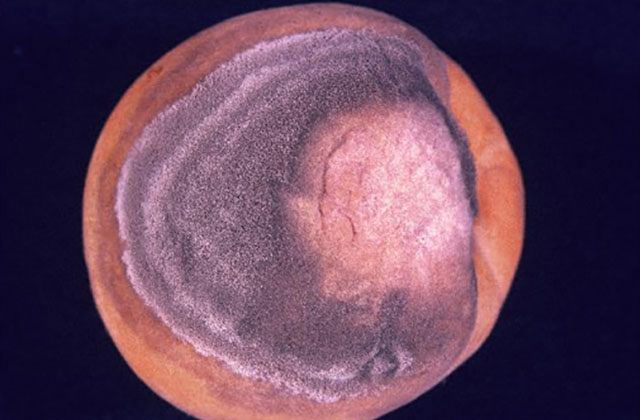 Post-harvest decay on peaches relates to decay developing after harvest, during the handling and storage phase. The process of infection and onset of decay development may manifest prior to harvest, only emerging during storage. Losses during the post-harvest phase can be rapid and severe, depending on the pathogen and storage condition.

Various fungal pathogens may cause post-harvest decay on peaches. The losses encountered range from a direct monetary value for decayed consignments being rejected upon arrival, to indirect losses due to price bartering and loss in market share.

Peaches may exhibit several post-harvest rot types, caused by fungal pathogens, of which brown rot (Monilinia laxa), grey mould rot (Botrytis cinerea),  Rhizopus rot (Rhizopus stolonifer) and blue mould rot (Penicillium expansum and other species) is most important, occurring in all the production regions of South Africa. Other decay types, such as Mucor rot (Mucor piriformis) and Alternaria rot (Alternaria alternate and other species) may also cause post-harvest losses. The significance of decay and the causal pathogen may vary annually, vary per area, cultivar and also per orchard. Weather conditions, but also fruit physiology and handling conditions, may affect the infection process and progress of decay during storage.

Fruit can be infected in the presence of fungal matter, if conditions are favourable. The availability of a suitable and susceptible host (in this case the fruit itself) along with the environment, are the other components of the disease triangle required for the establishment and progression of infection. The infection process of the fungi most prevalent on peaches, relies on the presence of spores (also referred to as conidia) on the fruit, followed by attachment and germination of the pathogen on the host surface, and subsequent colonisation of the host tissue. Disease expression then follows as the final outcome. Blossoms and mature fruit are by far most susceptible. Blossom infections by Monilinia laxa may lead to fruit decay during storage. Although not common, green peaches may become infected under extreme weather conditions, especially if the immature fruit have been injured.

Spores and other fungal matter present in the orchard, is referred to as ‘inoculum’. Although omni present, the inoculum load may vary during the season. Availability of susceptible hosts and prevailing weather condition, affect the inoculum load. It is important to continuously strive to reduce the available inoculum, which is mainly infected fruit of the present season, but also from the previous season (referred to as ‘mummies”). This action will lower the risk of establishing new infections and spread of spores for subsequent infections in the orchard.

The decay types generally infect fruit more readily as they mature, but other structures such blossoms, leaves and twigs, and also immature fruit, may be infected. The infections may remain latent or quiescent (invisible), until factors delaying development, are negated.

Pre-harvest weather conditions impact on fruit physiology and directly or indirectly influence pathogen development. The nearer to harvest and the more mature the fruit, the higher the risk for infection. Climatic conditions can also cause cracks in fruit, which are conducive for decay initiation.  Rain or dew (beyond 10 hours) and high humidity (>80%), could result in wetting periods. As a general rule, fruit should be dry before harvest. Mild, ambient temperatures of 15 – 25 °C prevailing in the orchard, favour the development of the decay causal pathogens.

Decay levels tend to increase the longer the storage and the higher the storage temperature which enhance fruit ripening and natural senescence.  Low temperatures of ± 0 °C during storage slow down respiration and fruit deterioration, as well as decay progression. Most of the fungi referred to will not be controlled totally by storage close to 0 °C, but development will be slowed down. The presence of free water, associated with condensation when temperatures fluctuate, stimulates germination of fungal spores. This could lead to infection or growth of previously established infections, with consequential decay development.

Sanitation entails the removal and destroying of any plant material that has become infected, which could be the source of succeeding infections. Such source materials need to be eradicated, eliminated or supressed. Sanitation practices are required in the field, but also the pack-house.

Diagnosis of which disease or pathogen is involved is necessary to take preventative or corrective actions.

Careful handling and avoidance of injuries

To handle, pack and store peaches with low post-harvest decay risk, it is necessary to reduce the possibility of infections establishing in the orchard. Injuries play a major part in the infection of peaches.

Sanitation practices are essential for the reduction of decay on peaches. Sanitation entails the regular removal of all infected plant material from the orchard. The primary objective is to reduce the infection potential in the orchard prior to harvest, as well as later in the handling chain. All fruit on the orchard floor should be removed and disposed of outside the orchard. After harvest, all remaining fruit and mummies (old and desiccated decayed fruit|) must be removed from the trees.

The use of fungicides or biological products is essential for the control of post-harvest decay. Orchard applications should preferably start at the blossom phase, but continue until prior to harvest. The use of post-harvest fungicides can further assist decay control. For application of chemicals during the pre-harvest phase, refer to guidelines on available registered products as supplied by ‘Agri-Intel’. Refer to their website for an updated list of fungicides acceptable for use on plums to various market segments. All fungicides must be used as per direction on the label.

Fungicide resistance may occur for some chemical groups applied pre-harvest. Repetitive or sustained fungicide treatments of one chemical group or cross-resistance between groups, may increase the risk of resistance. Botrytis and Penicillium spp. are generally regarded as pathogens showing a high risk for the development of resistance to fungicides, while Monilinia is regarded as a medium risk pathogen. For the latest information on resistance or cross resistance status to other chemical groups, contact your local crop protection advisor or product manufacturer representative.

Post-harvest fungicides permissable for use on peaches (and other stone fruit).

Sanitation is applicable for all places where the fruit is handled during and after harvest. Fruit showing visible signs of decay and/or injury should be removed before reaching the pack-house. Picking units, whether large bins, smaller crates or bags, should be clean and free from soil and plant debri.

Fruit should be harvested and packed with care, avoiding injuries. Injuries can be in the form of punctures, bruising or skin breaks. Detection of injuries at time of harvest , indicates a high decay risk. If fruit need to be harvested after problematic weather conditions have abated (e.g. rain / prolonged wetting), fruit that are slightly less mature or still of optimum maturity (rather than overripe) have a lower risk of decay development. An orchard inspection is advised after adverse weather conditions, to ascertain which orchard / cultivar is most suitable for harvest, with the objective of providing low decay potential fruit to the pack-house, for subsequent storage.  If peaches cannot be packed immediately after harvest, it is advisable to hold the fruit at a lower temperature (± 12 – 15 °C), to slow deterioration and ripening of the fruit and to restrain establishment of decay. Temperatures below dew point should be avoided, as free water from condensation favours decay development.

Only use post-harvest fungicides as listed in the table. The time between harvest and application of fungicides should be minimised, since chemicals become less effective the longer the delay. The efficacy of post-harvest fungicides does not only depend on the dosage, but also on efficacy of deposition and adherence to the fruit surface. Residue limits, referred to as MRL (maximum residue limit) need to be adhered to at all times (refer to the Agri-Intel website for further information; access to this information is by registration).