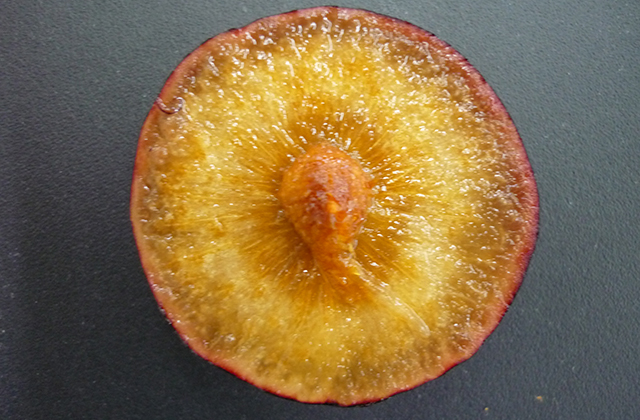 Overripeness in a plum.

Overripeness (OR) in plum fruit manifests as translucent breakdown of the flesh tissue below the skin which spreads inwards towards the stone with increasing severity and from which cell fluids can be readily expressed.

While internal disorders are a consequence of abnormal physiological events, OR is a natural and inevitable consequence of the senescence phase which follows the growth and maturation phases that occur in all fruit. Fruit ripening commences during the later stages of maturation and continues into senescence. While OR is not a disorder from a scientific perspective, it remains a very important fruit quality parameter.

Typically, plums with OR are very soft to the touch but still look good.  The flesh tissue has a translucent appearance and is soft and watery, unlike gel breakdown and internal browning, where the affected flesh tissue tends to be dry. The wateriness of overripe flesh tissue is ascribed to cell membranes loosing integrity due to senescence. This allows cell fluids to leak from the inside of the cells into the cell wall area after pectins located in the cell walls have been metabolised to such an extent that they are water soluble, and hence, cannot form gel complexes.

Generally, plums that have become overripe are unpalatable because the flesh has lost its texture. In advanced stages, plums with OR may even taste alcoholic due to onset of fermentation.

A common of cause of OR is harvesting plums at post-optimum maturity.  It is important to harvest fruit within the prescribed optimum maturity window for the cultivar.  This standard must be set based on research conducted using simulated packing, packaging, cooling, handling, cold storage and transportation conditions.

Sometimes there is a tendency to harvest immature plums in an attempt to avoid decay, gel breakdown and OR.  However, if the fruit is “greener’ than the optimum window standards, there is the likelihood of delivering small sized and unacceptably hard, tasteless fruit characterised by low sugars and high acids. To reduce OR it is recommended to harvest on the less mature side of the optimum window with the aim to deliver fruit to the market slightly backward in colour and relatively firm. Because plums ripen rapidly when exposed to temperatures higher than 15.0 oC after low temperature storage, the customer can easily ripen such fruit as required.

Generally, to ensure good quality plums, in particular for the long storage durations required for sea export, it is necessary to pick through trees two to three times to ensure that only optimum maturity fruit is packed. It is important to guard against packing significantly riper fruit together with optimum maturity fruit. This is because ethylene production from the individual riper fruits can stimulate the rest of the fruit in the box to ripen faster, and this is more likely to occur when shrivel box liners are used.

Field heat removal and forced-air cooling have a profound effect on fruit quality maintenance and this is especially true for plums with inherent weaknesses.  Since early season plum cultivars have a high respiration rate, the commencement of forced-air cooling as soon as possible after harvest assists quality maintenance. If harvested, packed and cooled on the same day, field heat removal is not necessary. If packed 24 hours after harvest, field heat removal, by holding the bins at 15.0 °C or in the case of fast ripening cultivars like Sapphire, at –0.5 °C, will help maintain quality. Generally, it is best to only use field heat removal at –0.5 °C in cases where plums cannot be packed within 48 hours of harvest.

To minimize the risk of internal disorders, the optimal forced-air cooling time to the storage temperature of –0.5 °C is between 12 and 24 hours for Pioneer, Sapphire, Purple Majesty and Souvenir. However, a cooling time of between 24 and 36 hours is recommended for most other main stream plum cultivars. In the case of possible heat wave damage, research has shown that slower forced-air cooling reduces internal disorder levels compared to faster cooling. Since OR development tends to increase with longer storage, it is good practice to store as short as possible.  Sometimes OR becomes a problem when it is least expected, because while it may not be a problem at the end of cold storage, it can develop very rapidly as soon as fruit is subjected to higher shelf-life temperatures.

Different storage regimes are required for different plum cultivars.  The cold storage regime applied has a significant impact on post-storage fruit quality.  Hence, it is of cardinal importance to know what regime to use for what cultivar and why!  Two regular atmosphere cold storage methods are commonly used for South African plums, namely: the single- and the dual-temperature regimes. The single-temperature regime entails holding fruit at
-0.5 °C for the entire storage period which could be anything up to 10 weeks, depending on the cultivar. The dual-temperature regime comprises storage at -0.5 °C for a maximum of 10 days after harvest, followed by a warming phase at 7.5 °C for 5 to 12 days (depending on the cultivar and the perceived inherent fruit quality) with the temperature again lowered to -0.5 °C for the remainder of the cold storage period. The single-temperature regime is preferred because it is easier to use. It also eliminates the time and temperature variations which occur when conducting the warming phase of the dual-temperature regime during transit in shipping containers. Single temperature therefore holds back fruit ripening more stringently, and hence lowers risk of OR. However, because many plum cultivars cannot withstand initial durations longer than 10 days at low temperatures without the risk of developing internal browning, dual-temperature storage is often the only solution to enable storage for longer periods. The risk associated with dual-temperature storage is that because it stimulates ripening, it increases the risk for OR, if not applied correctly on fruit with good inherent quality.

Controlled and modified atmosphere packaging is often used to retard the ripening of fresh produce. However, these technologies have not been applied on large scale for South African plums. Therefore, it is important to test technologies like these, and even seemingly innocuous packaging types such as outer box bags, wrappers and thrift bags, etc., very carefully, before commercial use.

Perforated shrivel sheets or perforated grape bags are commonly used to control shrivel in boxes of stored plums. These liners are effective because they increase the relative humidity in the environment surrounding the fruit by encapsulating water vapour migrating from the fruit, and this reduces moisture loss and shrivel. On the downside, box liners hinder effective temperature management because they form a partial air flow barrier which can lead to problems with OR. Therefore, if liners are used, it is very important that tried and tested protocols are used.

Perforated grape bags typically used in South Africa are less ventilated than perforated shrivel sheets. Hence, while shrivel control is better in cartons of plums packed using grape bags, there is a greater probability for accumulation of the ripening hormone, ethylene.  This poses a risk for development of OR, especially under dual-temperature storage conditions. It is important to note that ethylene accumulation which leads to faster fruit ripening can be a trigger for decay proliferation if inoculum is present, in particular, under conditions of high relative humidity such as within bag liners.

Climate impacts on fruit physiology which in turn determines the inherent quality potential of stored fruit.  The nearer harvest, the more harmful sub-optimal climatic conditions can be. In the case of plums, internal browning and gel breakdown are of more concern than OR following adverse climatic conditions. Rain and cool conditions followed by days of ambient temperatures higher than 38 °C have been known to accelerate the rate of fruit ripening between harvest and the onset of forced-air cooling in fast ripening cultivars such as Sapphire.

Rough handling during harvest and packing damages fruit that may slip by undetected on the pack-line and end up in the box. If not correctly packed and palletized, damage to the fruit skin and underlying flesh tissue can occur in the form of vibration abrasions, rub marks or bruising. Injuries to the fruit often cause rapid production of ethylene.  This stimulates rapid ripening of affected fruit which can lead to OR and secondary development of decay at the wound site.  If this ethylene wounding response is restricted to individual fruits, it can result in mixed maturities in a box which is often a cause for rejection by the buyers.  In the worst case, ethylene production from individual fruits can also stimulate other healthy healthy fruit to ripen faster than intended, and this is more likely to occur when box liners are employed.