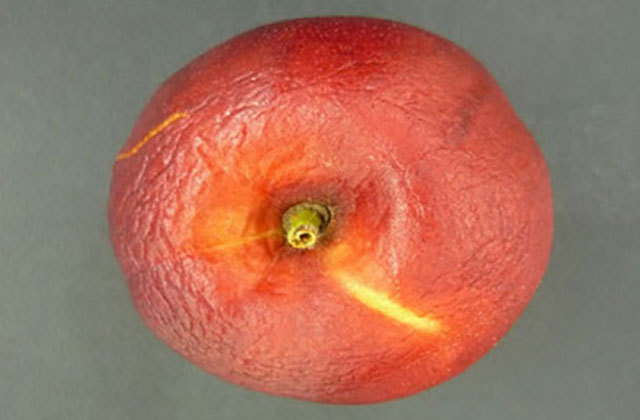 Shrivel in nectarine fruit is normally visible as wrinkled skin on the shoulders or sutures and it is caused by excessive loss of moisture.  In non-melting nectarines excessive moisture loss also results in rubbery fruit.

Moisture loss from fruit is governed by forces that promote the movement of water out of fruit, such as high ambient and pulp temperatures and low relative humidity, and the forces that retard the movement of moisture out of fruit such as low temperatures and high relative humidity. Other forces that can restrict   moisture loss are packaging, such as shrivel sheets, that can increase the relative humidity in the environment surrounding the fruit. Another force that restricts moisture loss from the fruit is the skin of the fruit itself.   This is one of the factors that differentiate cultivars with a low potential for moisture loss and from those with a high potential for moisture loss. The skin properties are affected by the maturity of the fruit at harvest. Normally, the wax cuticles in immature fruit are not fully developed and in over-mature fruit, cracks occur in the wax cuticle. For this reason immature and over-mature fruit is more susceptible to moisture loss than fruit harvested in the optimum maturity window.

To reduce shrivel harvest fruit early in the morning when temperatures are cooler, and if applicable, as soon as fruit are dry. Lower fruit pulp temperatures lead to a lower VPD during cooling and moisture loss will be reduced.

Harvest fruit at the optimum maturity specified for the cultivar since the potential for excessive moisture loss from optimum maturity fruit will be lower than in fruit harvested too immature or too mature.

While moisture loss can be limited by packing and cooling nectarines as soon as possible after harvest, this may not be possible if pre-conditioning is required. Fruit that must be pre-conditioned must still be packed as soon as possible after harvest. In nectarines where a shrivel sheet will be used, relative humidity in the environment surrounding the fruit will be increased and this will help control moisture loss. If fruit cannot be packed on the day of harvest, do not cool the fruit to -0.5 °C before packing as this will extend the pre-conditioning period. In this case fruit can be stored at 15 °C prior to packing the following day There are a number of shrivel sheet types available. It is important to use shrivel sheets that overlap when folded over the fruit and which have been properly tested. Force-air cool fruit immediately after pre-ripening to -0.5 °C. Fruit must be cooled to -0.5 °C within 24 hours after commencement of cooling.

Cultivars not susceptible to woolliness

Pack nectarines as soon as possible after harvest. If fruit cannot be packed on the day of harvest, the fruit can be placed at -0.5 °C prior to packing. Fruit should be packed as soon as possible regardless if the target temperature has been reached. The correct perforated shrivel sheets should be used on nectarines but not on peaches. It is important to use shrivel sheets that overlap when folded over the fruit and which have been properly tested. Fruit must be forced-air cooled immediately after packing. Fruit must be cooled within 24 hours after commencement of cooling.

Moisture loss occurs throughout the handling chain. It is therefore important to limit the period at high temperatures before and after packing and to cool the fruit as soon as possible. Relative humidity in cold stores should be 85% or higher, especially during forced-air cooling, since moisture loss from fruit during forced-air cooling is high. Forced-air cooling fans must be switched off as soon as the target cold storage temperature of -0.5 °C is reached. Because fruit could be cold stored for relatively long periods, moisture loss can be significant if not well managed.  During cold storage and shipping humidity cannot always be regulated.  Therefore, use of correct shrivel sheets and correct placement thereof in the boxes is of vital importance since this is often the only way achieve a high relative humidity in the area surrounding the fruit, and thereby control moisture loss, shrivel and/or wilting.